On 12th May 2017, contemporary artist Lorenzo Quinn unveiled his new monumental sculpture at the Ca’ Sagredo Hotel, Venice. Internationally renowned as one of the most popular sculptors of our times, the installation showcased Quinn’s artistic progression and his experimentation with new mediums and subject matter to transmit his passion for eternal values and authentic emotions.

Reflecting on the two sides of human nature, the creative and the destructive, as well as the capacity for humans to act and make an impact on history and the environment, Quinn addressed the ability for humans to make a change and re-balance the world around them – environmentally, economically, socially. Support saw Quinn reflect on and readdress these global issues by echoing the meticulous execution and technique of the Masters of the past to create a powerful and unique sculpture displayed for the duration of the Venice Biennale 2017 – 57th International Art Exhibition.

Support saw two large hands emerging from the Grand Canal to protect and support the historic building of the Ca’ Sagredo Hotel. The hands symbolise tools that can both destroy the world, but also have the capacity to save it. At once, the sculpture had both a noble air as well as an alarming one – the gesture being both gallant in appearing to hold up the building whilst also creating a sense of fear in highlighting the fragility of the building surrounded by water and the ebbing tide.

For this project, Officina delle Zattere was in charge of communications on Italian media and press relations for Italy (see the Italian press clips index). 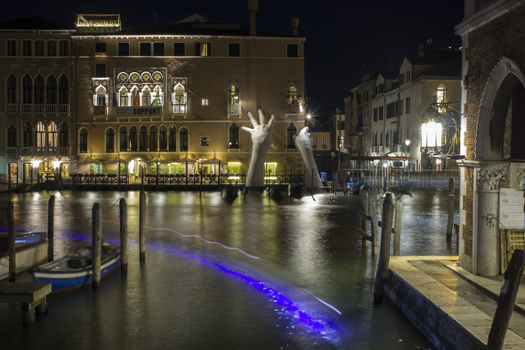